Amid this weekend's Brooklyn Book Festival, a few local writers met in Bushwick: “I’m gay, that’s why I moved to Brooklyn!”
Will McDonald, October 4, 2022
Will McDonald [email protected]

Occasionally overlooked in favor of some of the bigger names in attendance at the annual Brooklyn Book Festival are local writers from Brooklyn, especially those in emergence or independently published. Last Friday at East Williamsburg’s City Reliquary, Prospect Heights publisher Radix Media hosted an event called “Stories from Brooklyn,” which invited five local writers to a tree-shaded backyard to discuss the borough’s influence in their writing.

“The vibrant Caribbean community keeps me here,” Bernard Ferguson told onlookers. A Bahamian poet and essayist whose work has appeared in The New Yorker, Paris Review, and New York Magazine, Ferguson added that “the intensity of inequality and gentrification” in Brooklyn complicates their relationship with the borough.

“It’s not easy being a writer here,” they warned.

Folding chairs lined one end of the backyard, while the panel of writers sat in a row on the other side. The bar in the corner was bespectacled with bottle caps. Margot Atwell, who runs another nonprofit called Feminist Press, was moderating the public talk. Briefly, she had to pause the conversation, while everyone in the audience watched a rat climb across top frame of the backyard bar and up a tree—like a squirrel. “That’s so Brooklyn,” Atwell told them.

Others on the panel included illustrators John Dermot Woods and Bishakh Som, and poets Sasha Fletcher and Ghinwa Jawhari.

“There’s enough people here pursuing their dreams, enough people fighting through it to reinforce you,” Fletcher told them. He’s the author of a novel called Be Here to Love Me at the End of the World, published by Melville House, located in Dumbo. Originally from Allentown, Fletcher said he’s “never felt more at home in any other place” than Brooklyn.

Asked where his favorite place to write is, John Dermot Woods, author of numerous graphic novels, Radix’s recent Mortals, said that he does most of his writing on the Long Island Railroad, which he takes to and from SUNY Nassau Community College where he teaches.

“There’s nothing like the feeling you get when your bus pulls back into New York,” Fletcher told him.

“I’m gay, that’s why I moved to Brooklyn!” Ghinwa Jawhari said to laughs and applause from the audience and fellow panelists. One recurring theme amongst the group was their appreciation of the queer community in Brooklyn. Jawhari came to New York from Ohio to complete her residency for dental school. As an Arab-American, Jawhari said she felt unwelcome growing up in the Midwest. The experiences of the Arab diaspora in America is central to Jawhari’s literary work, recently collected into a chapbook called BINT, also published by Radix.

“As an immigrant, I feel like I have to be in New York City,” she said, noting that if she couldn’t live in Brooklyn she would likely leave the country.

Earlier in the evening, writer and illustrator Bishakh Som told the group that she has often felt out of place in her own South Asian community. Som, who also works as an architect, says her work is an investigation of “the intersection between image and text, figure and architecture, architecture and landscape.”

“Brooklyn is the Mecca,” Jawhari told them all. “There’s a reason the Book Festival is held here, right?” The poet added that place affects characters in her writing, and characters change with place, using the contrast between her childhood in Ohio in the years following 9/11 and her adulthood in Brooklyn to prove her point that she has certainly changed.

The borough was on the mind. Woods talked about how the art in his graphic novels takes influence from the physical space of Brooklyn and Som agreed, telling everyone that she is working on an upcoming graphic novel about an imagined city, and that when she begins to sketch what that city might look like, it is inevitable that some of the designs will borrow from Brooklyn.  Ferguson added that the structure of the city and its inequality was “almost a metaphor for itself.”

Although threatened by the prospect of rain, the event went off without a hitch in the crisp fall weather.

All images taken by William McDonald for Bushwick Daily. 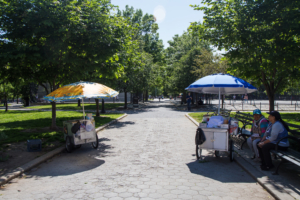 Opinion: Pass This Climate Bill Too