Opinion: Pass This Climate Bill Too

It was in 1855, near Cadman Plaza Park, that Walt Whitman wrote his great paean to America’s people and its landscapes, Leaves of Grass. The world it celebrated was one in which small barges on Newtown Creek carried fresh produce from Long Island and when Jamaica Bay was known the world over for its oysters and fishing. The world in which the poem was first published seemed illimitable—it promised so much because it gave so much.

But now, we are all too aware of how much is gone. After decades of chemical runoff from riverbank refineries, nearby Newtown Creek is best known as a Superfund cleanup site. And overharvesting has long ago devastated Jamaica Bay’s oyster population. If flooding becomes more frequent, as it is projected to, many residents may be forced to relocate into Brooklyn’s northern neighborhoods, which will only amplify the “Urban Heat Island” effect. Unique to pockets of mass urban concentration, this is the result of warmer summers, an overall lack of vegetation, dark industrial surfaces (such as asphalt), and a large accumulation of people. In the coming decades, it is likely that such an effect will turn much of Brooklyn into an unlivable brick-and-concrete grid.

This past summer, Congress passed a historic deal that is set to reduce our greenhouse gas emissions output up to 40% by 2030, an incredibly significant step forward that should not be underestimated. But there is still much to be done. Right now, we are only feeling the effects of greenhouse gas emissions from 2005 and, already, our country’s infrastructure is barely able to keep up – just look at the impact Hurricane Sandy had on the city’s subway system or the more recent depletion of Lake Mead, one of our biggest man-made reservoirs and the main source of drinking water for cities like Las Vegas. Things are set to get worse before we feel the effects of any decrease in carbon output. So what are we to do?

Work is certainly being done in Brooklyn. In Bushwick alone, the Brooklyn chapter of Citizen’s Climate Lobby has held multiple meetings with Congresswoman Nydia Velázquez, which has resulted in renewed advocacy for progress made on the cleaning up of Newtown Creek. And as climate change disrupts supply chains and reduces clean water sources, the lobby has convinced local businesses like Kings County Brewers Collective to endorse the Energy Innovation and Carbon Dividend Act, a different bill in Congress that would tax fossil fuel production at its source.

In a country which firmly believes in the power of the free market, this bill feels like a way to truly address this issue.

According to a 2020 poll from the Pew Research Center, 73% of voters support taxing corporations based on emissions. According to a survey conducted by the University of Maryland and 62% of voters are in favor of a carbon fee and dividend. That’s hardly a radical minority.

Of course, the unregulated free market allows for corporations to simply raise prices in order to combat any internal costs from such a tax. And, barring even more government intervention, this is what will probably happen initially.  But a central feature of the bill’s carbon fee and dividend approach is that dividend. 100% of the tax would be returned to each and every American family, distributed equally, so that by 2025 a family of four would annually receive around $1800, a number which would increase to over $3000, annually, by 2030. This should help combat rising costs and, when coupled with the newly-signed Inflation Reduction Act—which includes major tax incentives for renewable energy and the purchase of EVs—families and businesses will be better off sooner rather than later.

Yes, people with lower incomes will suffer disproportionately from initial higher prices. But, as it is, the financial and health burdens of climate change will also force them to suffer disproportionately. And that will continue to be true, with increasing severity, unless major change is enacted. In order to lift people out of poverty, you have to ensure they don’t fall further down first.

Even though the IRA is now law, there is more to be done. Because it will not be the inhabitants of brownstones and homes with faux Corinthian columns who suffer the brunt of a changing climate––it will be those who, like the residents of Brooklyn, rely on their local ecosystem for survival and stability. We can’t afford to stop. We have to keep pushing for more.

Greg Porter is based in Bushwick, where he does work for the Citizens Climate Lobby. Bushwick Daily is committed to publishing a diversity of local voices. Do you have something you’d like to say? Email: [email protected] 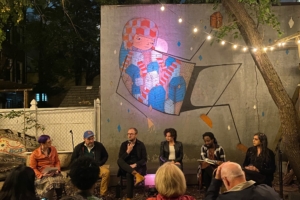