Sunday night 19 artists converged in The Active Space to compete against one another in a Bob Ross landscape painting takedown
Nicole Bailey, March 27, 2013

Sunday night 19 artists converged in The Active Space to compete against one another in a Bob Ross landscape painting takedown.  You may be familiar with the popular Brooklyn Takedown competitions that pit amateur cooks against one another in an attempt to win audience votes and street cred. In the 10 years since its inception, the Takedowns have morphed to include a variety of foods from avocados to cookies! This, however, was the first Takedown that wasn’t culinary, and what better place to host a paint-off than in Bushwick? The Active Space was set up with 19 easels facing the front of the room where repeat episodes of Bob Ross were projected on a screen. Each artist had 1 hour to create their version of a Bob Ross landscape for the chance to win the audience vote and $250 worth of art supplies from Utrecht. That’s a prize worth fighting for.

The Active Space was set up with 19 easels facing the front of the room where repeat episodes of Bob Ross were projected on a screen. Each artist had 1 hour to create their version of a Bob Ross landscape for the chance to win the audience vote and $250 worth of art supplies from Utrecht. While the artists painted away at their landscapes the audience milled around enjoying Sixpoint beers and chili made by host Matt Timms himself. Throughout the night Timms was talkative and actively mingled with the audience encouraging them to drink heavily in preparation for the upcoming auction as the proceeds from the event were going to Meals On Wheels. I asked Timm’s what prompted the shift from culinary to art. He had an energetic response:

“Shoot I don’t know how I came up with it, except that I’ve got a pretty artsy background. Just like cooking, there’s no way art should be a competition!  I like my Takedowns because they take the sheen and seriousness and professionalism out of the thing.  I’m not a fan of pro chefs, or the new culture of intimidation in the kitchen. I haven’t thought a lot about it, but I kind of like stripping away the intellectualism in this Painting takedown.  I’m fairly certain it would be impossible to write one of those strangely articulated art-speak artist’s blurbs about a Bob Ross repro!” 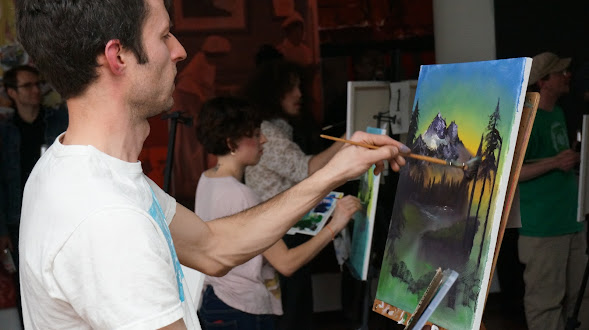 As a rule, Takedowns actually have no rules so each artist was free to interpret the painting in their own way. Some went for the literal approach while other artists tended toward the more abstract. When time was up there were traditional landscape paintings of mountains and babbling brooks going head to head with paintings of eyeballs in the sky and an exploding volcano. One artist collaborated with his very young son on a painting that included glitter paint along- side Bob Ross’s face superimposed on a cloud. 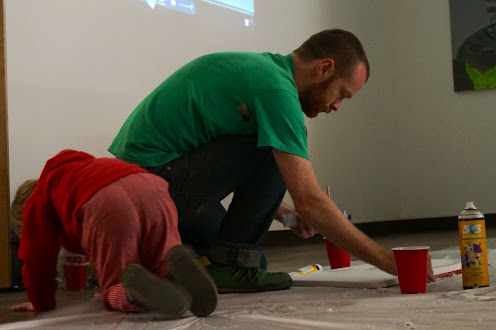 Once the artists completed their paintings and the audience cast their ballots it was time for the auction. Timms acting as the exuberant if hilariously inexperienced auctioneer ushered all of the artists to the front of the room and began the bidding. By this time the audience had been drinking for a while and things started to get enjoyably rowdy. Every single painting sold, some of them going for as much as $100 and the auctioneer himself couldn’t help but bid on a few paintings.

The night rounded out with the announcement of Alice Q. Hoang as the the winner of the audience vote and  a $250 gift card  from Utrecht Art Supplies. The event and auction raised $1400 dollars for Meals on Wheels and all in all it was another unique and interesting night in Bushwick. Timm’s summed up the evening  best, “This Takedown is a total experiment and Bushwick is the perfect spot to see if it will succeed or  if it’s a cool idea with legs. I think it is!  I’d love to do more!”  We’ll keep you posted on future Painting Takedowns.

Dr Lisa: F#@king with Impunity: Can Women have Casual Sex without Getting Emotionally Involved?