On Friday, the weather is set to hit 90 degrees; in Bushwick, the hot summer air will be filled with the latest iteration of what organizers have fashioned into one of the more adventurous music festivals that dot the summer landscape.

“We don’t say you have to be gay to be there, but it helps,” says Rayne Baron, a party promoter who goes by the moniker Ladyfag and is described in the New York Times as host of the city’s “Rave of the Future.” (writes the Times: “She rolls her eyes whenever someone objects to her use of the derogatory word, saying that she is appropriating it as a sign of affinity with gay men.”) Baron runs a small empire of club events around the city and describes herself constantly in a state of partying or party-planning. The most popular of these are her Battle Hymn parties that take place on Sundays in Chelsea, eventually namechecked by Brock Colyar in New York’s party column. Another project are these LadyLand festivals that take place at Bushwick’s Mirage every year and have been making quiet waves of their own in the queer dance scene, she told me. The inaugural lineup featured who else but the late hyperpop icon SOPHIE and Kim Petras, still riding the high of “I Don’t Want It at All.” The one last year reached a certain zenith of pop appeal, with Christina Aguilera topping the bill with her first show in New York in years. Landing at the tail end of the first wave of the ongoing pandemic, the set was a strangely illuminating pop smash, interspersed with interludes performed by drag queens. “She’s always been a big supporter of the gay community,” she explains.

The list this year is subdued, but kinetically inspired. The L.A. singer Tinashe had caught the Aguilera show and decided she wanted to do that herself. The festival immediately obliged. Says Baron about the act of organizing a party: “A lot of these artists are people who are either my friends or in my friends’ sphere.”

“I’ve been an admirer of her parties and we have so many mutual friends,” says Jam Rostron, a British singer who now lives in Estonia. Rostron records as Planningtorock, a moniker through which they have released an autobiographical slew of charged, electronic folk albums that seemingly cut the difference between Bjorik and ANOHNI. Writers at blogs like the Guardian highlighted the songs for their “chunky sax solos” and the song’s beating electronic heart had eventually attracted a crowd of other electronic musicians to her sphere. The Swedish duo The Knife picked them up to record an opera based on Charles Darwin’s On the Origin of Species, commissioned by a Danish performance group. James Murphy eventually put out their second album, W on his DFA Records. They’re hottest cosign so far came in the form of Bloodpop, the celebrated Lady Gaga producer, who Rostron met in Berlin. Now Rostron’s maximalist dance work can be heard on the remix album that came out last year, Dawn of Chromatica. The Planningtorock version of “1,000 Doves” is a haunting plea for lost time that dissolves graciously into the mist of the dance floor.

Rostron’s songs these days tend to have a sunnier bent than the melancholy bangers that dominated their early career. Planningtorock’s latest EP comes with the ecstatic title Gay Dreams Do Come True. A press release details the record in opposition to “the tragic queer narratives which can sometimes dominate the mainstream.” Lengthy symphonic devotionals to their new wife, a surgeon who convinced them to move to Estonia, Rostron’s newer record feels practically buoyant. Incidentally or not, Rostron tells me that they’re in the middle of transitioning.

“I’m the happiest I’ve ever been in my life,” they added. The show in Bushwick will make one of the first times that Rostron performs in the New York, a feat they attribute to the festival’s magnetic pull among the signifiers of queer pop culture around the world. “I don’t think you should throw a queer festival without someone from RuPaul’s drag race,” Baron tells me.

The selection this year is Vanessa Vanjie – the star from the show’s 10th season. Before she performs, Vanjie will be “running around with a camera and a microphone and we’re going to see what happens there.” Baron adds that “We’ve partied together. That’s how you get to know people real fast.”

Under Tinashe, are a collection of leading names in what might be called a global queer dance scene. Given top billing is the Chicago DJ Honey Dijon, a trans music producer that may or may not have produced at least two tracks on the Beyonce album that’s allegedly out next month. (The producers of the festival give in, slightly, to speculation and bill Dijon as “Beyoncé’s (alleged) latest collaborator.” For what it its work, Dijon has her own official remix from Lady Gaga’s Chromatica too. There’s also Robert Alfons’ gothy project TR/ST – “for the kids who want to wear all black, which in Bushwick there’s a lot of,” says Baron. Initially contemptuous with bands like Crystal Castles, Alfons’ work has grown insular, but remains striking and who is still working on a follow–up to his two-part industrial epic 2019’s The Destroyer.

“I’ve been listening to some of these people since 2014. It feels almost curated for me,” the Chicago DJ Ariel Zetina tells me.

Zetina has played Bushwick before, she tells me she had been a regular presence behind the decks at Bossa Nova before it burnt down earlier this year. Zetina has also put out a steady stream of tough, taught dance records that include 2019’s techno workout Organism. (Sample title: “Establish Yourself In My Body,” delivered on the record by a twisted, icy sample.)

She likes playing the neighborhood, she says, because of the unique community cultivated by the Bushwick techno scene, which she says attracts a crowd that’s there for beats.

“I think there’s a really specific music style that’s come out of Bushwick and it’s all what came out of Bossa Nova. It’s an interest in techno and breakbeat,” she adds. “Clubs are the only places you can feel what the music is.” 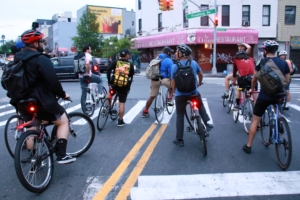