“I moved to Bushwick so I could network in real life,” reads a poet with long, glowing hair from his phone. He wears a white v-neck and a fur jacket and is somewhere between the 15th or 20th person to take the stage that Sunday night inside a converted autoshop on Evergreen Avenue. The event is “An Ode To 2022,” a theme few speakers really stick to, put together by Matt Weinberger, who identifies as a 23-year old photographer who is trying to pivot to writing.

Their commitment to the bit matters less to Weinberger, he tells me that he is getting sick of themes, everything doesn’t have to fit that way. Weinberger has a kind of distinctly-unshaven-but-not-unclean kind of look, Warby P.-style glasses and bears an incredible resemblance to character Drew from Search Party.

He is mostly what some people call a party photographer; a portrait he took of minor party photography icon Mark Hunter – who goes by Cobrasnake – appeared at the top of one of Brock Colyar’s weekly party columns at New York magazine earlier in June. “He’s more like my friend,” Weinberger says about his relationship with Hunter, whose moniker is listed next to the name of Terry Richardson in the wikipedia page for “indie sleaze.”

“I think that there’s kind of an idea that we’re way more closely linked than we are. People have thought I was his intern or thought I was his assistant or something,” he muses, adamant that none of that was true.

The poetry night comes at the tail end of a year of various readings Weinberger has put on, which he likes to call “happenings” or, in the case of this one, an “end of the year materialization.” He put the air quotes around those words himself. He had passed around a spreadsheet of some 44 names that moves around Instagram, everyone who I show this to tells me they are most intrigued by “secret guest,” a contrivance Weinberger invented because he had only gathered 43 names.

The location itself is not adverse to secrets. The former autoshop first opened during the pandemic as the infamous ‘Illhouse,’ home to numerous “secret, indoor ragers” taking the first year of the pandemic, according to the New York Post. In the time since, and under new management, the location has transformed into something called the Highside Workshop for the past six months, which feels as far away from an illegal rave space as can be imagined this side of a poetry reading. Behind the unremarkable garage door is actually a well-equipped event space, with white, professionally-painted walls. It looks nothing like the ill-fated Illhouse, testifies one of its new operators, who wears a leather jacket and tells me he’s in a local jazz band you should look out for called The New Approach. The pipes had burst over at that place and then its operators had disappeared, opening up the location for new management. At a table, they sell t-shirts designed by a “really cool designer” named Sean Marrinan, which read FOR CAP ON REAL NO GOD. At some point, the man in the leather jacket also takes the stage and plays a skeletal, instrumental skiffle.

The headliner among all of these was Nico Walker (above) who Weinberger said “needed no introduction,” but later introduced him by telling the crowd “there’s a movie made about him that stars Tom Holland.” Walker then told Weinberger that he wouldn’t recommend watching it; it had been widely panned and Walker would tell GQ that the Russo Brothers, famous for a handful of Marvel movies, “didn’t necessarily use me on the film,” an adaptation of Walker’s first and, so far, only novel.

“I’m not really good at poems, it’s not my wheelhouse,” Walker says, before reading “a thing from a thing that I’ve been working on a while,” some of which had been published earlier this month in the latest issue of a Texas magazine called the Southwest Review, identified as an excerpt from his “first work of fiction” since that novel’s mild success. In that book, Walker narrates the life of somebody who comes home from the Iraq war, gets addicted to painkillers and begins robbing banks. In the new material, we greet Walker’s character in prison, “with nothing to do save for cultivate some erudition,” by avidly reading in his prison’s library, a not uncommon cliche in prison writing.

Standing straight and speaking in a slurred, low-register monotone drawl, Walker’s casual authenticity was quietly moving. Before him and after him were a lot of other people, including Weinberger himself, who read a poem about how great his year had been. Other read poems about contemplating hand-holding and I was particularly stirred by a poem about a leaking bathtub, and also the Bushwick poem, which I think was ultimately about whether or not to move into some guy’s apartment. Every second or third reader would actually pick up a guitar instead and sing. Toward the night’s end, one of the last of these ended covering “Francis Forever,” by Mitski.

The recently-opened Highside Workshop is located in Bushwick.

All images taken by Andrew Karpan. 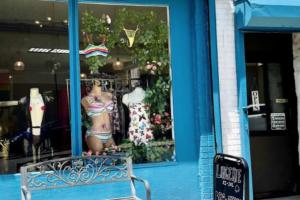