Around the corner from Elsewhere and just steps away from Jefferson Avenue is a colorful mural of the Amazon rainforest, the work of a Bushwick designer named Steffi Lynn Tsai.

The mural, located at 573 Johnson Avenue, is a bright, green, leafy oasis in a part of the city that lacks accessibility to greenspace. Hints of hidden Amazonian creatures peak from behind huge leaves. The beak of a toucan, the yellow and black spotted tail of a leopard and, elsewhere, the wing of a parrot.

“I just want people to see my work, whether it’s like a [natural] environment, or… to just see something and take a pause in their day. Just like a nice break the day-to-day. It’s like a fresh breath of air,” said Tsai in a Zoom interview.

Tsai got the commission from National Geographic, the Disney-owned nature magazine, as part of its Earth Day campaign this year. Tsai painted the Bushwick one with two other people and it took them four days. She told me that she wanted the mural to serve as a rather massive reminder to city dwellers to stay grounded and appreciate mother nature.

“I really appreciate this planet and what it has given to us and I do think that we need to give back as much as possible,” she added. “Of course, there’s a million ways I can do better but I try every day to give back a little bit, at least in my practice.” She talked about hoping to empower people who pass by to start caring about the environment.

This fits the mold of Tsai’s illustrative work, which largely focuses on lettering and graphic design; she had studied these subjects at Pratt. As a graphic designer, she’s most well-known for big murals like these, embedded with positive messages and affirmations, penned in her signature cursive script and often appearing at places like Twitch’s offices on Park Avenue.

“Originally, I wanted to do something that involved big lettering, just because I specialize in hand lettering. But I kept it all natural with the environment,” she told me. She describes the mural as “a big, eye-catching moment.”

For her, making these intensely positive murals is an intensely physical process.

“I used to be a really athletic person. I did a lot of sports and I was a dancer. So, I love using my body. I was a dancer for 18 years. I love the physical aspect of murals.”

All images taken by Elia Griffin. 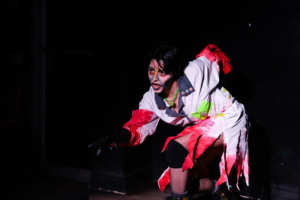 Live From the Farewell Bar, It’s the Soup Queen