This Halloween, The Asylum Is Back In Ridgewood

The Deep End is actually a very likable bar. Inside, the pastel-painted walls create an alien, subaquatic world full of the cute mermaids, balloon fishes and unicorn octopuses. The only thing that cues you in that something twisted could happen there is the drawing of a Marilyn Monroe, her head exploding like an atomic bomb.

And indeed, something twisted happens every Halloween here since 2017, when co-owners Jon Gneezy and Jorge Mdahuar turn the bar into one of the most scary haunted houses in the city.

“It kind of started small, like we could maybe do this and see what happens, and then it kind of was a hit,” Gneezy told me. “We love doing it. We love Halloween.”

This year, like in past years, the nightmare at the Deep End is something they call the  “Ridgewood’s Asylum,” which Mdahuar calls both an “insane asylum and escape room.”

“It’s not just like your regular haunted house where you only have to run through,” Gneezy added,”In ours you have to interact with it if you want to survive.”

To go from room to room, visitors have to search through drawers looking for a key or to find the pieces of a puzzle that’s demanded by a demon named Lucy, who boasts severe daddy issues, a desire for human blood and a taste for secret toys.

Before meeting Lucy, visitors watch a mockumentary that tells the story of the fictional “Ridgewood’s Asylum,” full of ghosts of patients stuck there forever after years of psychiatric malpractice. Now, they want visitors to stay there forever too.

Mdahuar tells me that the movie often leaves people with the impression that there was actually an asylum in Ridgewood, which he finds amusing.

“I would say it’s one of New York City’s most exciting haunted houses,” he said about his bar’s haunted house . “It’s like true horror. It’s just a Halloween must.”

The Ridgewood Asylum is located near the Deep End, at 1080 Wyckoff Avenue. Tickets go for about $25. Does Bushwick Have Talent? 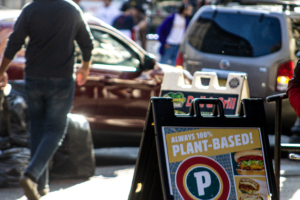