Scenes From an ‘Activist Opera’ at the House of Yes

Last month, the House of Yes was home to a dance company called the House of Glitter, which was putting on a show called “The Historical Fantasy of Esek Hopkins,” a self-described “activist dance opera.”

The company had put together the piece following a residency in Providence, Rhode Island at the former home of Esek Hopkins, a historically notorious figure known for making numerous slave trade voyages in the 18th century.

Over the phone, Matthew Garza, one of the show’s co-directors, told me that he believes “in the power of choreography for justice and social change.”

“We like to think that the world needs choreography to move forward together in unison,” he added.

The first night of the show had been a confirmation of the transformative and healing powers of art; debating, resignifying  and transforming the past.

“Some parts of it, you could say, we’ve been preparing our whole lives. So much of our culture is part of it, songs we sang with our grandmothers, our aunties, dances that we learned as kids in our cultural communities that we grew up in.”

The show reimagines the life of one of the casualties of Hopkins’ slave trading voyages, among the many who had been thrown overboard from his ship, the Sally, during its many long and brutal trips across the Atlantic.

In their opera, she stays alive. Guided by queer goddesses, she becomes a mermaid who dives into the depths of the ocean to found something called the “Mermaid Femme Empire.” There, she gives birth to a generation of queer creatures, whith whom, according to the play, we all share ancestry.

“We felt really called to honor her as part of our mission to honor all the people on the Sally, and to honor our lineages and the people who are suffering all around us in our communities, still from the impacts and the maintenance of colonization and slavery,” he told me.

In addition to co-directing the opera, Garza plays a character called “La Llorona.”

In full drag and singing to the Chavela Vargas’ song of the same name, Garza reinterprets the song’s myth of a mourning ghost, as a way to both honor and make amends with his Texan origins.

“La Llorona has been a space for me to heal my relationship with my mother and with my parents, and to think about how I can offer a softer energy to them,” he adds.

Beyond singing and dancing, the opera guides the audience through short sessions of collective breathing and pops in a Spanish class too. The idea? That being patient can be revolutionary in the accelerated times we live in. “Se hace el camino al andar,” goes the chorus of one of the opera’s closing songs, to which the audience is invited to sing along. (the line translates to: you make the road by walking.)

It was not a surprise that performances of House of Glitter last month all eventually turned into a party, followed by drag shows that featured performances by “RuPaul’s Drag Race” contestants  Yvie Oddly and Aja LaBeija.

“‘House of Glitter’ is the world that we’re building. It’s the world that we fantasize of leaving behind for our children,” Garza told me. “It comes from a place of imagining what liberation looks like, feels like [and] sounds like for us today and tomorrow.” 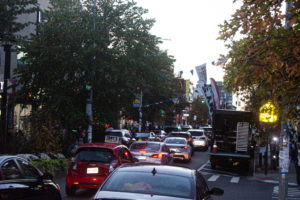